[If you haven’t already read the Predation Overview, you might start here.]

The largest and most established organization is Space and Time, Interglobal (SATI). Originally, SATI was an interglobal conglomerate that began sending bioengineers, paleontologists, and other specialists back to the Cretaceous period on top-secret scientific/business missions. In the hundred years since, SATI has evolved from a group of scientists and explorers into a more militarized organization.

SATI continues to control the majority of the original time-travel operation bases—fortified underground bunkers filled with supplies, technology, laboratory equipment, and more that were set up by the early arrivals—but their hold is tenuous at best. Everyone, SATI or not, knows that whoever controls the bases also controls the supply flow—including any remaining time-travel technologies. As the asteroid draws near, attacks against the bases by groups like the Butterflies are growing more frequent and increasingly difficult to repel; the group spends much of its energy and resources keeping a tight hold on what it has, while still attempting to find a way back “home.”

Over time, many of the bases have become more self-governing and self-sufficient, a change that is also starting to threaten the larger structure of SATI. The capital base, SATI;0A (commonly called Soway) is attempting to bring the other bases back in line, but not everyone in this new generation shares the same beliefs, and it’s becoming harder for the organization to present a unified front.

In the flickering firelight, the Queen of the Butterflies bows her head. A book—hand-bound in red leather—lays open upon her palms. She wears gloves, black and thin, nearly threadbare. When she begins to read, the group gathered around her becomes silent. Not a scuff. Not a breath. If anticipation were a sound, it would be this utter stillness.

The Queen’s eyes are closed. The words come from memory, from repetition, from belief.

Out of chars and ashes, out of dust and coals, like golden salamanders, the old years, the green years, might leap; roses sweeten the air, white hair turn Irish-black, wrinkles vanish; all, everything fly back to seed, flee death, rush down to their beginnings, suns rise in western skies and set in glorious easts, moons eat themselves opposite to the custom, all and everything cupping one in another like Chinese boxes, rabbits into hats, all and everything returning to the fresh death, the seed death, the green death, to the time before the beginning. A touch of a hand might do it, the merest touch of a hand.

“We are all the butterfly,” she says.

“Stay the path,” they answer.

Together, as they slip away into the darkness: “And listen, always, for the thunder.”

The Butterflies are a subversive, guerrilla group. They believe that humans shouldn’t try to fix the time machine technology, that they should die out in the upcoming cataclysmic event so they don’t screw up even more of the evolutionary time path. These beliefs are based on the ”bible” that the Queen’s grandmother brought back in time with her, a copy of Ray Bradbury’s short story, “A Sound of Thunder.”

As a general rule, Butterflies eschew technology, subsisting on what they can make, steal, or scavenge. They identify themselves by painting or carving an image of a butterfly on the bottoms of their boots. It’s rumored that their spies have infiltrated all levels of SATI, and if you look carefully, you can find their graffitied messages on cliff faces, large trees, and the backs of certain dinosaurs.

Interested in Predation? You can back the Kickstarter here. 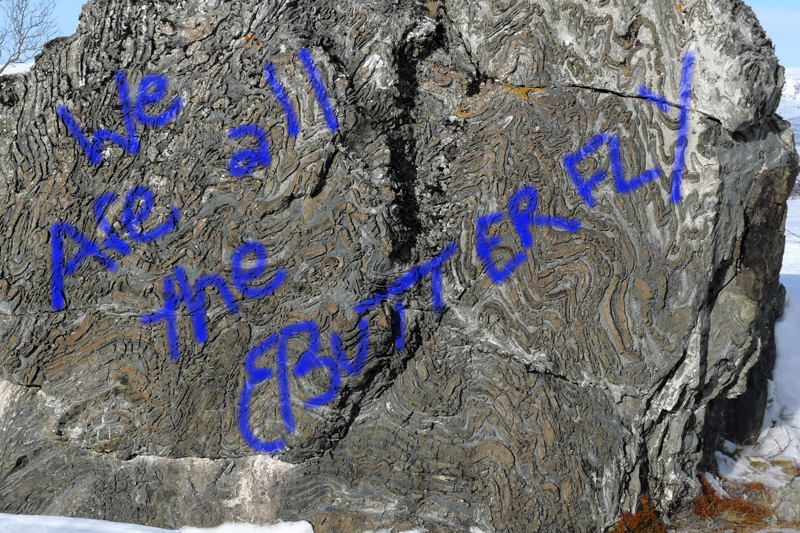 "If you want to get good at writing about sex, read lots of Shanna Germain. She seems to instinctively understand the web of connections between sex and life itself. Her way of using the English language’s sex words makes them seem neither profane nor mundane, but rather both magical and as necessary as breathing." ~Erin O'Riordan