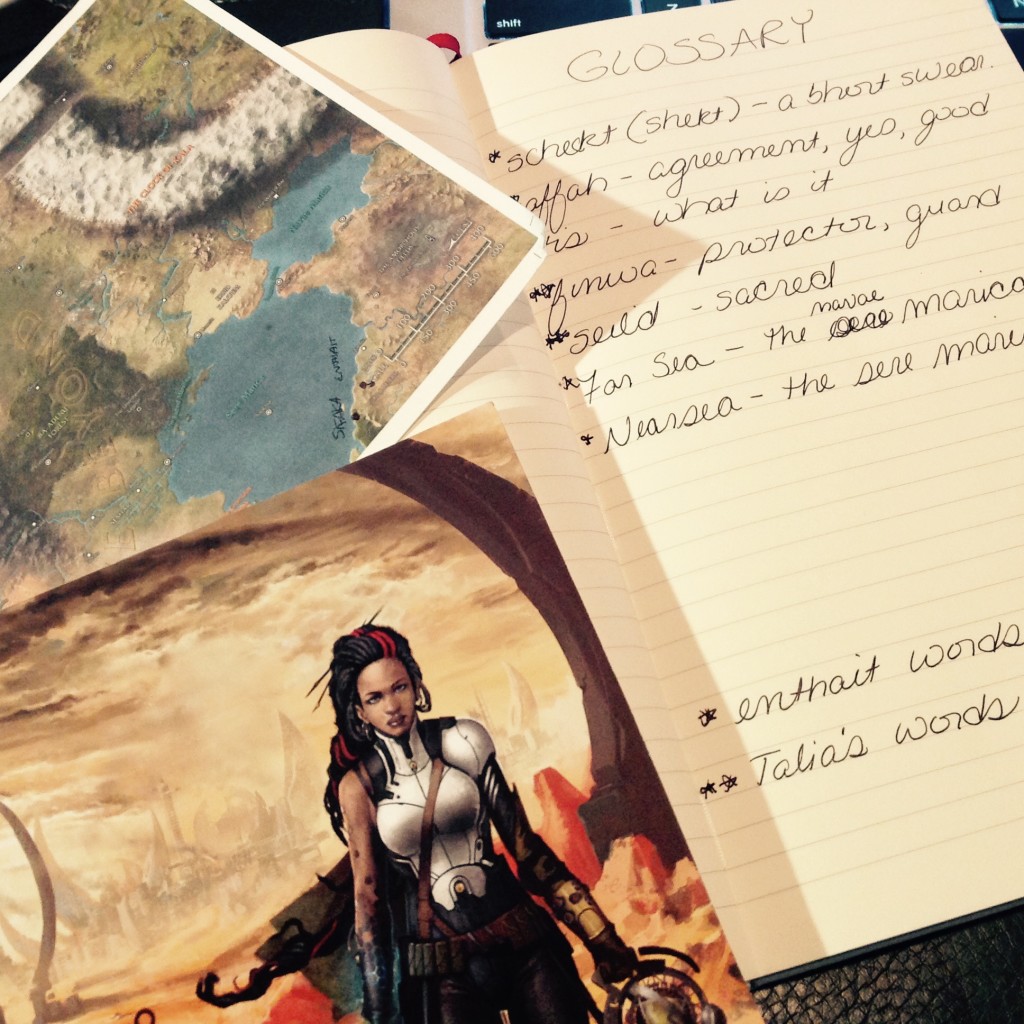 Today was one of the first days in a while that I’ve had trouble working on the novel. I know why — I walked to the coffee shop, thinking about the novel the whole way, really excited to get to work on it. Then I sat down and …

…the guy behind me made a phone call that started with, “I’m turning in my resignation. Fuck this shit.” And went downhill from there.

…I forgot my headphones.

…someone close by was wearing way too much perfume and my headache was instant and ferocious.

…I’m feeling a bit stuck on where to go next in the book. Go back and rework the first chapter to send to Kickstarter backers? Write a new scene? Do more planning?

None of those things by themselves is enough to knock me off my writing track, but all of them combined? It’s more than my brain can handle. It’s kind of like this: I have a dog who is 90 percent the most awesome dog in the universe (sorry, other dog owners who read this, but it’s true). But 10 percent of her is a reactive dog. If other dogs bark at her, she sometimes loses her shit. We’re working on it — she can walk by one dog now, two dogs, maybe three dogs and be mostly calm and well-behaved. But if, on a single walk, she walks by a fourth dog? Then no amount of training, treats, or tricks is going to keep her from freaking the fuck out. It’s kind of like decision fatigue, only it’s more like focus-fatigue.

That’s how it is for me as a writer. One distraction? I got this. Two. Yep. Three? Maybe. But four or five in the same writing session? Nope. I’m done. And no amount of training, treats, or tricks is going to keep me writing right then.

This morning, I did try for a bit, focusing inward and putting some words down on the page, but they weren’t good words. (Note: There are two kinds of “not good” words. The first is “rough draft not good” words, which are useful words, and ones that I can come back and fix later in the revision process. The second–what I encountered today–are words that won’t be useful in the revision. They’re just me putting words down for the sake of putting words down. It was only my own determination — I WILL DO THIS — that kept me typing and the words were angry, not in tune with the book, useless in the end.)

So, I switched gears and started writing this blog post instead. It provides a useful vessel for my cranky-pants mentality, it is easier to write right now because I know what I want to say, and it makes me feel like I didn’t give up on writing completely.

Now. I want to be careful here. It’s really easy to read this and think that it’s okay to just drop your writing at any sign of difficulty. But that’s not what I’m advocating. I’m saying know your limits and your triggers. The fault here, in many ways, is mine. I left the house without my headphones, which is the only action that I could have controlled in this scenario. That alone would have decreased two of the triggers and left me with more possibility of productive writing this morning.

I’ve found that taking a few minutes to prepare before I sit down to start writing is vital to my ability to be productive. What are your writing focus-fatiguers? Mine are social media, the Internet and email (I set up Freedom and Self-Control before I sit down to write); my caffeine addiction (I have coffee or tea ready in a cup that I like); noise (I try to remember my headphones so that I can block distracting noises AND provide myself with the right noise–my novel soundtrack, or whatever I’m in the mood for); and emotions (I’m bored. This is hard. I want to play Fallout. I should get up and have a snack – I have lots of ways for dealing with that, and it’s probably enough for its own blog post, so I’ll tackle that at a later date).

Will I come back to the novel today? I don’t know. I will probably try. There is still the stream of excitement from this morning’s walk bubbling inside me, and since I capped that excitement (instead of wasting it by writing useless, grumpy force-writing), I am hoping that I can come back to it later and that it will still be fresh and full of life. I’ll let you know.

In the meantime, I’ve written this blog post, which might help someone else. I’ve dispensed with my grumpiness at those who have a large social footprint. And I’m looking forward to the walk home, where I can continue to mull over what’s next for the novel.

Edited to add: I did return to the novel late in the day. It wasn’t as productive as a morning writing session would have been (morning is the time that brain goes zing and the words flow like coffee; nighttime is more like each word is a heavy rock and picking it up and putting it down in the right spot takes a lot of work), but I went in and reworked some of the opening chapter, and even solved a plot dilemma that I’d been having. (If you are a Kickstarter backer of the novel, you’ll get to see this opening chapter pretty soon!).

Follow along! If you’re interested in learning how this novel (or, really, any novel) comes together, feel free to subscribe to this blog. Over on the right in the sidebar, you can subscribe to JUST posts that pertain to The Poison Eater, so you don’t get all the other stuff.

Shanna Germain may well be among the most accomplished, consistently interesting, imaginative and original prose stylists in contemporary American fiction, transcending all considerations of genre." ~Terrance Aldon Shaw