The draft of The Poison Eater is complete, and is currently in the hands of my editor and publisher, who will come back to me and tell me all the things that I need to do to make it great. In the meantime, I’m working on a Numenera adventure for Gen Con called The Skein of the Blackbone Bride (no spoilers) and a short story to accompany our underwater Numenera book, Into the Deep.

I started this story this afternoon. Here’s an excerpt from the draft, which I’m currently calling Wrecked (that feels a little too on-the-nose, so it will likely change). Beware: here there be typos, I’m sure. And ghost crabs. 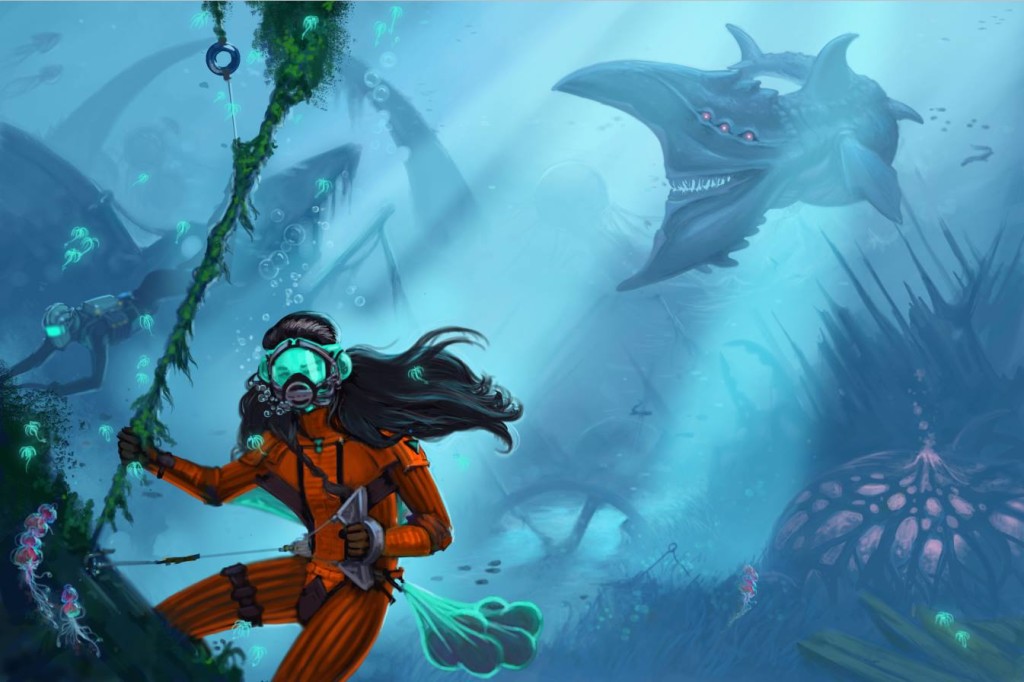 This is where she died.

“Almost died,” Garil would say. Except that Garil did die here, and so he doesn’t say anything anymore, does he?

You left me here, she thinks as she shimmies down the seaweed-covered tether toward the wreck. The thought is followed by expletives, but not tears. You can’t cry this deep down in the ocean, she’s discovered. Well, you can. But you shouldn’t. There are some things they don’t tell you in training, because no one who is still left knows to say them. Don’t cry. Don’t trust. Don’t move.

Her weighted boots hit the side of the structure with a dull thud that reverberates up through her body. As soon as she lands, her right foot floats loose, sending her sideways through the water. She’s still got hold of the tether, by some lucky stupid instinct, and she tightens her grip on it, pulls her foot up to look. The back of her boot has automatically ejected the weight somehow; there’s just a blank space in the heel. The weight wasn’t magnetized—they’re not Therasti; they don’t have that kind of money—so she’s sure it’s rolled all the way to the bottom of the wreck by now, and is ruining some poor crustacean’s day right about now.

Hope you’ve got one hell of a shell, she thinks.

Normally, she hates tying herself to the wreck. It’s heavy and cumbersome and—and you almost died because of it last time. That too. But the boot thing is a problem—her hand is already aching from gripping the tether, trying to keep herself from spinning around it. So she brushes long strands of seaweed back until she finds one of the reality  spikes that someone else has driven into the side of the wreck and uses the cable from her belt to hook herself in.

Ethne’s six-eyed jybril circles and circles, clacking its sharkmouth, swishing its giant tail. The chittering sound of its rows and rows of teeth comes through the water, through her waterbreather, through the voicepieces she wears in both ears—one for the base, one for Ethne.

She clicks her jaw to the right. The movement turns on the voicepiece on that side. “Get your brehm-brained predator off of my back,” she says. “Before I kill it.”

“Good luck with that!” Crackle. Fade. Return. She bets Ethne’s voice is always full of static, even when they’re not a thousand feet under the surface. “She can swim—”

She clicks him off again. Why she bothers, she doesn’t know. Ethne’s a child. A child who thinks he’s able to control a ten-foot long insatiable predator just because it hasn’t eaten anyone on the team yet. It’s only been two weeks. Give it time.

Once, Ethne told her that he was surprised the jybril—he has a name for the creature, but she can’t remember it—hadn’t bumped her for a test bite yet, because it was attracted to the color red and her dive suit was red. She’d wanted to bump him for a test bite, but had merely turned her suit on dark mode, shining every light that it had right into the lenses of his fisheye goggles. She didn’t quite understand how light worked down here, but she didn’t deny the tiny pulse of happiness she felt when he’d pushed his hands over his eyes and ended the conversation. He wasn’t a bad kid. But he was definitely a kid.

They sent me down here with a child, Garil. And then the string of swear words that always seem to come after his name now. Spitting them out like bad seeds. She worries that she’s developed a syndrome. She hadn’t been topside in six weeks. She has forgotten the color of air. The smell of the sun. Can no longer remember what her own voice sounds like, beyond the burble and hiss of breath and breather.

The jybril is too close, brushing by her with just a few feet to spare, and she waves it away. Which is a mistake. It’s not some little fish, easily scared off by an odd motion. Its teeth are nearly as big as her hand. It circles, long tail sliding by her. She compresses, doesn’t wait to see if it comes back around, and drops herself through the first hole she sees in the side of the hull.

Shanna Germain is one of those rare authors in erotica who knows how to tell a good story and how to convey a scene of excitement and passion. Many writers can do one or the other. Some of them are able to do both. But there are few who are able to combine storytelling and passion with Shanna Germain’s mastery of the craft." ~Ashley Lister